For every Mainstage Season show, we ask the director to share their thoughts, inspirations, or research about the show. We include these notes in the playbill, but why wait to read until you’re sitting in the theatre? It’s a great way to get insight about the show before you see it!

Anyone that knows me, knows that I am a musical theatre aficionado. I love all
things musical. I have over 1500 musical cast recordings on CD…and over 150
books on the history of musical theater. So, when I was asked to direct [title of
show], which is, above all, a love letter to musical theatre…I didn’t hesitate to say
YES!

This show is a uniquely American art form highlighting the joy of collaboration.
Struggling writers Hunter and Jeff race against a deadline to enter an original
musical into a theatre festival. This show depicts their journey as artists and friends
as they write a musical about writing a musical. The actual rehearsal period has
also been a journey of artists and friendships. I have had the pleasure of bringing
three new artists to the stage of ACT, as well as one that I have known since he was
a kid in our youth productions. Along the way, we have created new friendships
and have had lots of fun. I celebrate their hard work in bringing this show to the
stage.

Since it is so unique, there are many musical theatre references scattered
throughout the show. I encourage you to check out the [title of show] References –
Official [tos]sary in the playbill so that you might become a bit of a “musical theatre
aficionado” as well.

What’s going to surprise people about this show?
I think people are going to find out lots of information about what goes into creating a show. They’re also going to leave with a bit of musical theatre history due to all of the theatre references in the show.

Why is this show worth seeing?
This show is for anyone that loves musicals, or has ever wondered what goes into the creation of a musical. It’s a very informative show, performed by a very talented cast.

What has been the most fun about directing this show?
I have enjoyed directing this show, because I got to work with a new group of actors, and we worked together to create something very organic and fun. We had lots of laughs during rehearsals.

What has been challenging about this show?
It’s always challenging when I am the director and also handling choreography and musical staging for the songs. But, I do enjoy it. Another challenging thing has been filling the big stage of ACT with a show that is only 4 actors and a piano. But, I think I managed to figure it out.

How many of the obscure references did YOU have to look up?
Hmmm? I think I had to look up maybe 3 or 4 of them. For example, I had no idea who Dan Pessano was. I also had the pleasure of looking up all of the playbills for the song, “Monkeys and Playbills”. I discovered quite a few obscure shows while doing that.

Anything else you want to add?
Just come to the show, sit back and go along for the ride with these characters as they go through the ups and downs of creating a show, while maintaining their friendships and sanity. 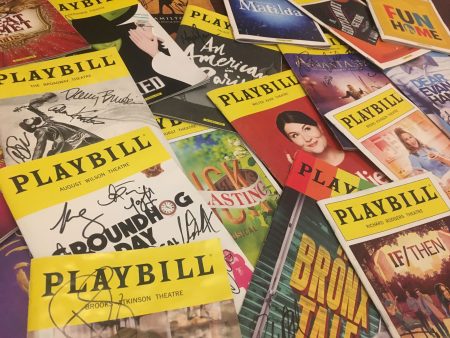