All hands on deck, hard hats on, tool belts fastened. Let’s do this!

Over the past week, Asheville Community Theatre’s Mainstage took a final curtain call, and while this wasn’t the closing performance of the theatre, it was the closing of a chapter – the last 70 years. For 70 years, ACT’s Mainstage was home to more than 250 shows totaling over 2,200 performances. It was a space for a community to gather – as an audience member, volunteer, or part of the cast or crew – and for a community to grow.

For many, walking in the door and sitting in their favorite gold chair or turning on the bulbs above their dressing room mirror recalls memories of milestones. First stage kisses or kisses under the alter (yes, it’s true, we’ve even held weddings here); tears of proudness over conquered stage fright; the realization that a character onstage was them and they were not alone.

The beginning of demolition brings a sense of loss that comes on expectedly, though not entirely unwelcome. A chance for reflection. To say goodbye and thank you.

This week, the chairs where parents held their children on their laps were taken out, the booth where stage managers said the words, “Stand by for the house lights to dim” was emptied, and the Green Room where casts gathered for sing-a-longs and pep talks was cleaned out from the kitchen cabinets to the call boards.

So, while we can’t take with us the divot in the floor from the dropped hammer during a late night rush to finish a set or the faded paint where a Tanglewood camper painted his masterpiece, we can take the promise that soon – very soon – we’ll get to do it all again. Act Two. Even better than Act One.

More stage kisses will happen and more tears of joy. More fear overcome and more liberation unlocked. This is theatre, and demolition week breaks ground on a world of possibilities. So, to that we say, let’s do this! 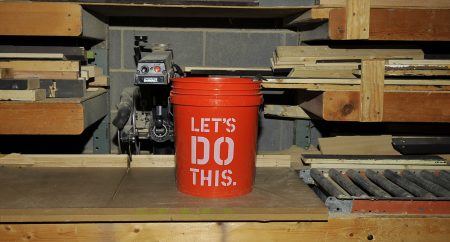