Updated March 7, 2022
Aliens, androids, and space gerbils?!? Fight Girl Battle World, a sci-fi romp through a galaxy far, far away, opens next on the ACT Mainstage. Written by Qui Nguyen (Disney’s Raya and the Last Dragon, She Kills Monsters) and originally produced by Vampire Cowboys, America’s best known geek theatre company, Fight Girl Battle World opens March 11, 2022 with performances Thursday, Friday and Saturday nights at 7:30 pm and Sunday afternoons at 2:30 pm through March 27, 2022. Tickets are available online, over the phone at 828-254-1320, or in person at the Asheville Community Theatre Box Office.

Fight Girl Battle World is a sci-fi spectacular that blends stage combat, puppetry, and multi-media to create a uniquely cinematic experience for the stage. Set in a futuristic universe where humanity is nearly non-existent, Fight Girl revolves around E-V, a hardnosed prizefighter and the last known female human in the galaxy. Amidst the aliens and the androids, E-V must fight to keep the human race from being completely obliterated in this “delicious intergalactic theatrical space ride.”

“This play tapped into the geek in me,” said Josh Batenhorst, director of Fight Girl Battle World. “Like most sci-fi tropes, it is a hero’s journey on the surface, but just underneath are equally compelling journeys addressing some of our deepest thoughts about life’s purpose, the nature of sacrifice, and what it means to enact vengeance or achieve atonement. But it’s important to note that, like any geeky thing, it can also just be plain wacky.”

Audience members for all performances are required to wear masks throughout the performance. Seating capacity has been reduced to 50%, and seats have been blocked throughout the audience to provide social distancing between patrons. No concessions will be sold. More information on ACT’s COVID policies can be found here: https://ashevilletheatre.org/about/covid-policies-and-info/ 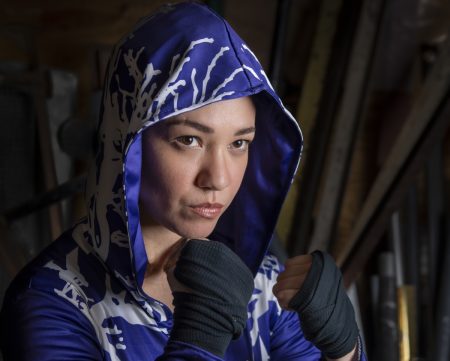