“The only weapon I’ve got is comedy” – Mel Brooks

As a theatre, we’ve been thinking a lot about the timing of opening The Producers, a musical that includes Nazi imagery and references to Hitler, the week after the horrific events in Charlottesville.

So we decided to go to the source. What did Mel Brooks himself – a Jewish writer and comedian who served as a combat engineer in the US Army during WWII – have to say about his skewering of Hitler and the Nazis in The Producers?

“After all the people that he was responsible for killing and after utterly destroying half the world, I just thought the only weapon I’ve really got is comedy. And if I can make this guy ludicrous, if I can make you laugh at him, then it’s a victory of sorts. You can’t get on a soapbox with these orators, because they’re very good at convincing the masses that they’re right. But if you can make them look ridiculous, you can win over the people.” (interview with Salon)

“You have to bring him down with ridicule … It’s been one of my lifelong jobs – to make the world laugh at Adolf Hitler.” (interview with 60 Minutes/CBS)

When The Producers premiered on screens in 1968, it was 23 years after the end of World War II. Our production opens the weekend after Charlottesville. We might not all be ready yet for the ridicule – and that’s okay.

As a community and as a theatre, we have other weapons against hate and intolerance. We will continue to be a place where acceptance, respect, and love and are taught and practiced and lived.  Where people from all different walks of life volunteer their time and lean on each other to create art together.  Where stories are told that help us make sense of our world – or make a fool of a man and a regime who desired the complete opposite.

The Producers is much more about the mayhem of musical theatre than anything else. So with laughter and joy and the amazing energy of hundreds of Asheville community members who started as strangers but ended as friends, we’re opening the curtain. 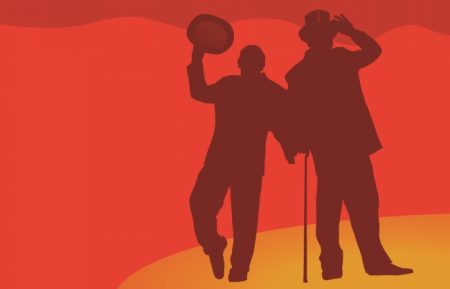