This August on the Mainstage, Asheville Community Theatre will present the NC premiere of The Groundling by Marc Palmieri, a play about the ups and downs of marriage and relationships.

About the show: After stumbling upon an outdoor production of a Shakespeare play in Manhattan, Long Island landscaper Bob Malone returns home inspired to write a play about his troubled marriage. He hires two reluctant New York theatre professionals to spend a week at his home and stage the play in his garage, with a cast of colorful locals. A modern romantic comedy with a moving and unexpected ending.

This production includes a small cast of seven community members working diligently and closely together to bring this show to life with the gentleness and care it deserves. Four of the cast members are making their ACT Mainstage debuts – and three are returning to our stage! ACT has asked The Groundling cast to submit some personal and not so personal answers to some of our most burning questions.

To kick things off let’s give a big welcome to ACT newcomer Daniel Sandoval! He’s a native Long Islander – who just happens to be playing Bob Malone, also from Long Island!

OK, What’s that? Great question – in short, I like to say “Daniel makes machines dance for a living.” Mechatronics is a portmanteau of Mechanical and Electrical, and basically the term used for people who design machine automation systems. Here’s a great example (skip to 3:00 of the video) for the really cool part:

That was a very unusual job. I literally was living in Radio City Music Hall for a week and a half getting all the bugs out of that system. Most of what I do is for factories – like automobile assembly lines.

(For a really detailed description of Daniel’s brilliant creativity in engineering the motion control system for the bus that carried 35 Rockettes, read this!)

What appealed to you about this show?  I totally know these people. I think I’d be friends with my character in real life. We’d have a beer together now and then.

How you became involved in theatre:  My friend’s 12 year old daughter showed me how it’s done

Favorite production you have been a part of:  This one!

Would you ever consider writing a play about an event in your life, If so, what event? Growing up Puerto Rican on Long Island.

Daniel, welcome to the ACT family! Catch Daniel in his ACT debut in The Groundling, which runs August 17-September 2. For tickets and more information: https://ashevilletheatre.org/events/the-groundling/ 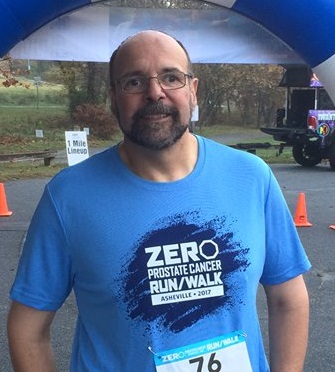