We are so sorry to share that our friend Susan Dillard passed away on Saturday, January 4. A memorial service is planned for the spring, and a date will be announced once it is known.

Thank you to Deborah Austin, her dear friend, for sharing these words about Susan’s lasting legacy in Texas and in Asheville’s theatre community:

Susan Dillard created many memorable productions, roles, designs, magical creations and friendships in her 67 years. 50 years ago, during the summer she graduated from high school, she appeared as a Shark girl, Graziella, in ACT’s Asheville Youth Theatre production of West Side Story. In her Freshman year at UNC-Greensboro, Susan appeared as a magic spirit in Aladdin with other roles on and backstage to follow as she completed her B.A. in Theatre. Back in Asheville, she was Titania in A Midsummer Night’s Dream and Bianca in The Taming of the Shrew with the Montford Park Players before she left for graduate school in Minneapolis.

With a M.F.A. in directing, Susan called Texas home for 15 years where she worked with several theatre and opera companies. With Different Stages of Austin, she directed 12 productions including Talking With…, Light Up the Sky, Long Day’s Journey into Night, and Titus Andronicus. As an actress, she appeared in Cloud Nine, Aunt Dan and Lemon, The Secret Lives of the Sexists, and The Tavern.

In the late 1990s, Susan returned to Candler to care for her elderly parents. She directed Twelfth Night for MPP and appeared in the new amphitheater as Emilia in Othello. Susan created wonderful masks, headpieces, and Kudzu, a three-person caterpillar puppet, for The Biltmore Estate’s Biltmore Bugs, and masks, headpieces, and an amazing dragon for Tanglewood Youth Theatre productions of The Hobbit and Little Mermaid, Jr. She directed the ACT Mainstage productions of Twelve Angry Jurors and The Grapes of Wrath and in 35below, Betrayal and Misery. Susan designed costumes for the Southern Appalachian Repertory Theatre and was a dedicated volunteer in the ACT costume shop. Two months ago, she was a member of the team that built nine elf costumes for Miracle on 34th Street. 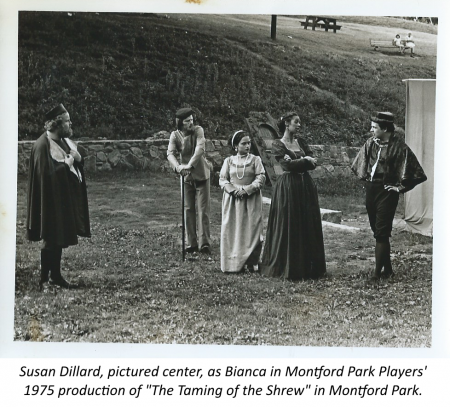