The extravaganza of holiday cheer Elf The Musical opens next here at Asheville Community Theatre! Based on one of the most beloved holiday films in recent years, Buddy the Elf’s story is a heartwarming tale that helps each one of us discover and accept our “inner elf.” Elf The Musical runs December 2-18, 2022 with performances Friday and Saturday nights at 7:30 pm and Sunday afternoons at 2:30 pm with an additional performance Thursday, December 15th at 7:30 pm.

Despite being six feet tall and lacking proper toy-making skills, Buddy the Elf hardly noticed that he was different from the other elves. After all, he grew up in the North Pole! But when Buddy learns that he was actually born in New York City, he takes off on a brave quest to find his birth family. He is shocked to find out that his dad, Walter Hobbs, is a workaholic on the *gasp* naughty list and doesn’t believe in Santa Claus. But Santa’s sleigh can’t fly without lots and lots of holiday cheer! Can Buddy help his family and all of New York City remember the true magic of the Christmas spirit?

You certainly do not have to know the movie to enjoy the musical adaptation of Elf. Director Jeff Catanese says that the musical “has plenty of catchy tunes to get anyone in the holiday spirit!” Elf The Musical features songs by Tony Award nominees, Matthew Sklar and Chad Beguelin (Disney’s Aladdin on Broadway, The Wedding Singer, The Prom), with a book by Tony Award winners, Thomas Meehan (Annie, The Producers, Hairspray) and Bob Martin (The Drowsy Chaperone).

Get your tickets today! 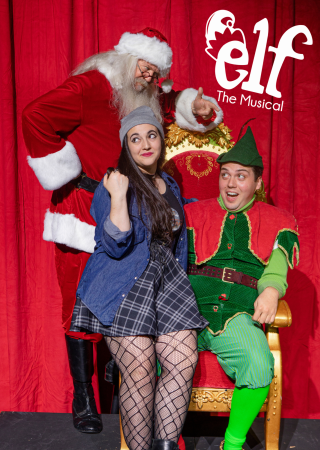