For every Mainstage show, we ask the director to share their thoughts, inspirations, or research about the show. We include these notes in the playbill, but why wait to read until you’re sitting in the theatre? It’s a great way to get insight about the show before you see it!

Wikipedia tells me that “geek” is a “term originally used to describe eccentric or non-mainstream people; in current use, the word typically connotes an expert or enthusiast obsessed with a hobby or intellectual pursuit.” Fight Girl Battle World, was first produced by the Vampire Cowboys Theatre Company of New York. The company’s website says they are “an OBIE Award winning “geek theatre” company” and Qui Nguyen, the playwright, describes himself as “Author. Playwright. Screenwriter. Geek.”

Wikipedia also tells me that the term shares etymology with the terms “fool” and “freak” and I think that is fairly accurate. Geek culture is not only about having an uncommon interest in comic books or Dungeons and Dragons, but it is also about having the feeling that one is a bit of an an outsider. A self-described “geek” is referencing a feeling that there is a part of the self that is unknown and unknowable in this realm. What looks like an obsession with Star Trek or Buffy the Vampire Slayer is actually an attempt to connect to others who share this particular shadow trait in their own personality, and loving it in spite of the mockery of others (remember “the fool”).

When I first saw Fight Girl Battle World at NC Stage a decade or so ago, I felt invigorated. The play tapped into the geek in me. Like most Sci-Fi tropes, it is a hero’s journey on the surface, but just underneath are equally compelling journeys addressing some of our deepest thoughts about life’s purpose, the nature of sacrifice, and what it means to enact vengeance or achieve atonement. Even the Cosmology of the Universe is addressed in the play, but it’s important to note that, like any geeky thing, it can also just be plain wacky.

The script itself reads more like a movie than a playscript. This brings about a few difficulties as a director. What does it mean, live and in-person when the playwright writes “Cut to..” in a theatre script or calls for Starfighters to fly on the stage? How do you achieve that? Gratefully, I have had a class act of geeky compatriots to help figure this puzzle out and they have all performed admirably. It could go without saying that Covid certainly threw this production for loops at times as well, but we are so excited to have had the opportunity to come together as a community to share this theatrical geeksperience with you. 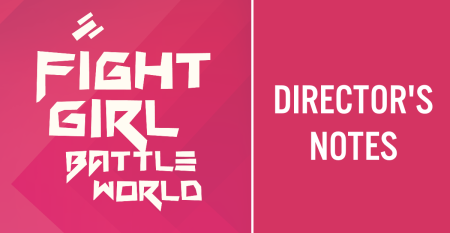