Gardens and cultures clash in this comedy of feuding neighbors, good intentions, and bad manners! Written by Karen Zacarías, Native Gardens uses witty humor and engaging real-life drama, to showcase conflict – and the worst and best ways to work it out! Directed by Candace Taylor, Native Gardens runs February 10, 2023 through February 26, 2023 with performances Fridays and Saturdays at 7:30 pm and Sundays at 2:30 pm. Tickets are $18.00 – $29.00 and are available here, by phone at 828-254-1320 or in person at the our box office.

Native Gardens has become widely popular for being both thought-provoking and hilarious. In the show, Tania, a very pregnant PhD candidate, and Pablo, her high-powered lawyer husband, buy a house with a big backyard in Washington, DC. Living next door to community stalwarts Virginia and Frank is great – until a disagreement arises over a long-standing fence line between their homes. The conflict spirals into an all-out war of taste, class, privilege, and entitlement.

This is Director Candace Taylor’s debut at ACT, though she is no stranger to the stage. Taylor is an actress, teacher, vocal coach, and director who is Chair of the Theatre Department at Warren Wilson College. She has performed with the Acting Company, directed a lot of Shakespeare, and created Walt Disney Theatrical’s outreach project for The Lion King.

Our production of Native Gardens stars a cast of four. The show features two ACT familiar faces – Meghan Marcelo as Tania and Kathy O’Connor as Virginia, and two newcomers to ACT – Kelvin Bonilla as Pablo and David Mycoff as Frank.

Get your tickets now to this highly entertaining, 90 minute show! 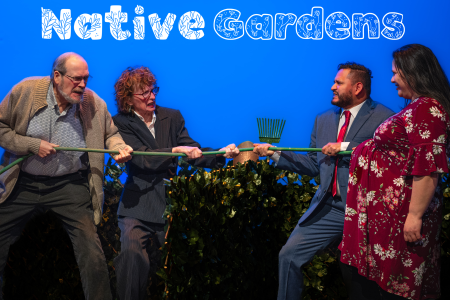