The overarching theme for Asheville Community Theatre to consider concerns how we live together in personal, civic, and even global communities. The 2022-23 Mainstage Season reflects a desire to explore this interest artistically. That is why we have chosen these five plays and musicals for our 77th season.

Tickets and subscriptions will go on sale later in the summer, but we wanted you to have the first look at what’s coming up next!

We’ll also be announcing audition dates, student matinees, our line-up for classes and more Education Dept. programming, the Readers Theatre Showcase season, info about 35below, and more a little later – so keep your eyes peeled for all the ways you can plug in at Asheville Community Theatre!

By Thornton Wilder
September 30 – October 16, 2022
Our Town, which is set in Concord, NH, tells the story of small town life from birth to death through the perspective of two next door families, the Gibbs and the Webbs. ACT’s vision is to give this American classic a fresh approach and contemporary design to reflect our own town of Asheville, North Carolina.

Book by Thomas Meehan & Bob Martin; Music by Matthew Sklar; Lyrics by Chad Beguelin
December 2-18, 2022
When Buddy is an infant, he mistakenly crawls into Santa’s bag of gifts and is transported to the North Pole. The would-be elf is raised, unaware that he is actually a human until his enormous size and poor toy-making abilities cause him to face the truth. With Santa’s permission, Buddy embarks on a journey to New York City to find his birth father and discover his true identity. Faced with the harsh realities that his father is on the naughty list and his half-brother doesn’t even believe in Santa, Buddy is determined to win over his new family and help New York remember the true meaning of Christmas. Based on the beloved holiday film, that proves that the best way to spread Christmas Cheer is singing loud for all to hear.

By Karen Zacarías
February 10-26, 2023
Pablo, a high-powered lawyer, and doctoral candidate Tania, his very pregnant wife, are realizing the American dream when they purchase a house next door to community stalwarts Virginia and Frank. But a disagreement over a long-standing fence line soon spirals into an all-out war of taste, class, privilege, and entitlement. The hilarious results guarantee no one comes out smelling like a rose.

Music, Book & Story by Steve Martin; Music, Lyrics & Story by Edie Brickell
April 21-May 14, 2023
Inspired by a true story and featuring the Tony-nominated score by Steve Martin and Edie Brickell, Bright Star tells a sweeping tale of love and redemption set against the rich backdrop of the Blue Ridge Mountains of North Carolina (including scenes in Asheville) in the 1920s and ’40s. When literary editor Alice Murphy meets a young soldier just home from World War II, he awakens her longing for the child she once lost. Haunted by their unique connection, Alice sets out on a journey to understand her past — and what she finds has the power to transform both of their lives. With beautiful melodies and powerfully moving characters, the story unfolds as a rich tapestry of deep emotion. An uplifting theatrical journey that holds you tightly in its grasp, Bright Star is as refreshingly genuine as it is daringly hopeful.

Book by Keythe Farley and Brian Flemming, music and lyrics by Laurence O’Keefe
July 21 – August 13, 2023
A rock musical that expands on a June 23, 1992 Weekly World News tabloid story about a bat boy – half-boy, half-bat – found in a cave. The musical – at turns both deadly and hilarious – deals with themes of racism and revenge, hypocrisy and forgiveness. 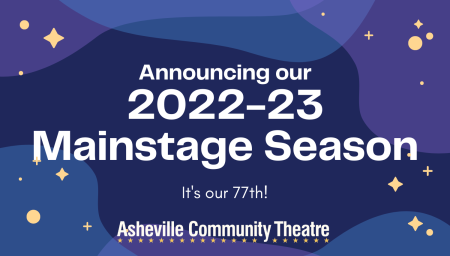