The fierce, funny, and fabulous Mandy Bean is back onstage at ACT! You’ve seen her as Jeannie in The Great American Trailer Park Musical or perhaps in Snowbound or Nuncrackers. Or, if you’re a Montford Park Players aficionado (and if you’re not, you should be!), you’ve seen her in Othello, Julius Caesar, or A Midsummer Night’s Dream. In The Groundling, Mandy plays Victoria, the actress who stuns Bob with her ability to listen and react when he sees her onstage. He hires her to help him put on the play he has written – and though she’s not used to working in a garage in Long Island, she takes the job.

How did you become involved in theatre? I started out as a dancer when I was very young, and I fell in love with Mary Martin’s Peter Pan as a toddler. I was always the first to volunteer to read anything out loud in class, and I remember desperately wanting to be in plays, but there was never an opportunity to do so. I didn’t actually find an outlet to start acting until high school, but the drive to be onstage has been there for as long as I can remember.

Who’s the favorite character you’ve played? It’s hard to choose, but the one that comes to mind is Emilia in Othello. She has one of the best monologues of any woman in Shakespeare, and it felt amazing to deliver that.

Can you relate with your character? In some ways, absolutely. I do a lot of Shakespeare, and there are some aspects to Victoria that are really familiar to me. I relate to Victoria’s love of acting, and her frustration over not always being able to find work.

Do you have a favorite moment in the show? It’s hard to pick a favorite, but when she first arrives and interacts with Dodd is a fun one, especially with Scott Keel. We’ve been friends for a decade, and it’s always fun to be onstage with old friends!

Do you have a dream role? There are a few (and I’ve already performed some, which is lucky), but I’m determined to play Mama Rose in Gypsy someday, even if I have to produce it myself!

You’re an actor, but also a director, producer, and teacher. What options or barriers exist in Asheville for women to be able to tell the stories they’d like to tell? One of the biggest obstacles to producing theatre in Asheville is finding performance space. That really goes for everyone, not just women; there just aren’t enough suitable, affordable spaces in town for the amount of people trying to put on shows. For women, there’s added layers of fighting against sexism, ageism, body shaming … the list goes on. It’s hard to even get cast sometimes unless you’re thin, white, young, and fit the mold of what the media sells as “attractive.” Which is silly, because there is SUCH a huge variety of human beings on the planet! I think women in theatre are helping to change that. I was told in college that I would never play ingenues, only character parts, and here I am playing the “hot actress” in this production (thanks, Betsy!) I think we’re seeing more and more powerful women in theatre, and even seeing more feminist men who are truly trying to be supportive, to be better listeners. The tide is turning; we’ve just got to keep riding the wave!

Mandy, we’re with you! So excited to have you back onstage with us! Come and see Mandy in the NC Premiere of The Groundling – get tickets and more info here: https://ashevilletheatre.org/events/the-groundling/ 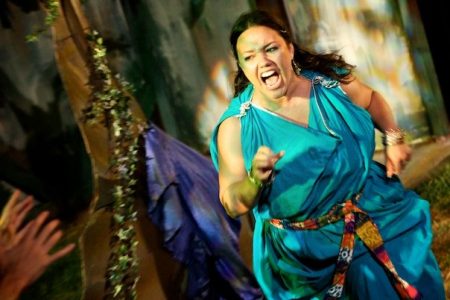